The BlueDuct® is Now in Saint Louis’ Most Iconic Landmark

In 1963 construction began on the Gateway Arch, which represented Thomas Jefferson and St. Louis’ role in the western expansion. Weighing in at 43,226 tons of steel and concrete, the magnificent Gateway Arch is still the tallest manmade national monument in the United States. The renovation project began in 2014 and is still underway with The BlueDuct® portion complete as of April 2017.

The architect was particular on which areas the contractor-System Aire could run ductwork and air control. This parameter posed a challenge everyone was up ready to tackle. AQC holds a unique position with its underground duct solution – The BlueDuct®. “The underground duct provides a solution that no other ducts can accommodate. We needed to go underground since the project had special requirements,” stated Jim Fahrenhorst from Thermal Mechanics.

A prototype underground vault was created and sent to Saint Louis, MO. By creating a vault system with a 30″ x 30″ floor access to house VAV boxes, Thermal Mechanics could put connection points into the vault to run power, communication, and hot water piping for the VAV reheat coils. As a result, Tom Fry, from AQC, built a The BlueDuct® continuous curved radius grill plenum custom built to fit around a 100 ft curved concrete wall in the new entrance portion of the project. Additionally, Fahrenhorst added, “The BlueDuct® is easy to install, very few problems or questions from installing contractor. No surprises. Shipping was fast since most items were in stock. This project demonstrates the full flexibility and reliability of The BlueDuct® products. 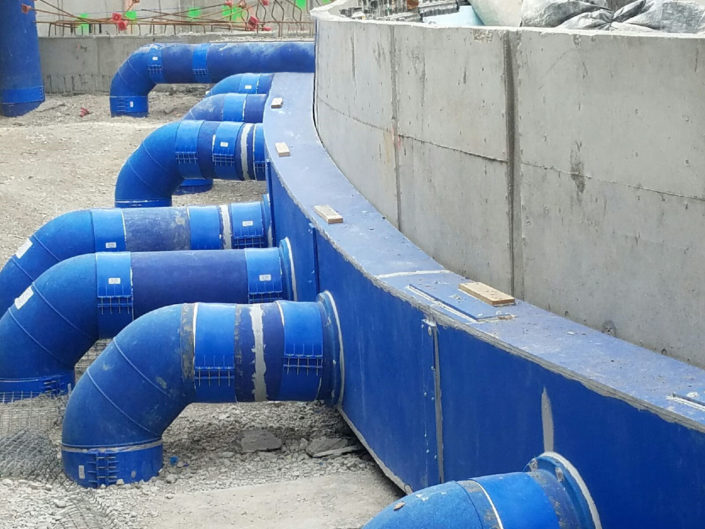 Since 1966 Thermal Mechanics Inc. has built valued partnerships with global HVAC manufacturers, architects, consulting and industry engineers, general and mechanical contractors, and building owners while delivering engineered HVAC solutions. Thermal Mechanics commits to being a resource for the most efficient and cost-effective solutions supported by the latest industry technology exceeding our customers’ expectations.